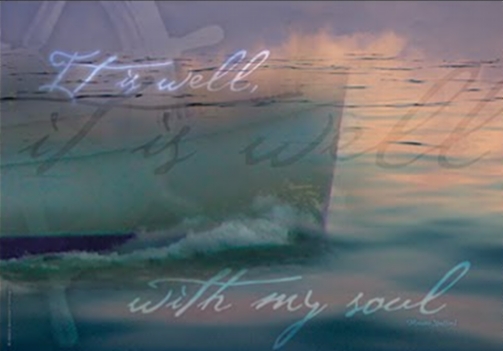 I remember the very first time I sang this hymn while tears streamed down my face. I had sung it countless times before, but this time I finally grasped the depth and meaning of the words I was singing. I was at a funeral; the funeral of a young man who had wrongfully used me, betrayed my trust, and left me wounded, along with several other young ladies. A group of us decided to attend his funeral together as a collective effort to say, “We forgive you, and we let this go.”

The emotions that came over me when the words of this anointed hymn began to play were entirely unexpected. I had already gone through the healing process and sought the Lord for comfort and strength to overcome the pain that this man’s actions had brought upon my life. So why, now, did the tears flow? Why, now, such a healing river?

Many years ago, I learned of the history behind the words of this famous and beloved hymn. The author of these treasured words, Horatio Spafford, had been dealt several devastating blows, and was left entirely and utterly broken by the pain. The first of these tragedies was the death of his four-year-old son, which was shortly followed by the Great Chicago Fire, leaving him in financial ruin. As the economy took a turn for the worst in 1873, he and his family had planned a trip to Europe. A last minute change of plans sent his wife and four daughters on the ship ahead of him with promises of his

soon departure to join them. History tells us that the ship carrying his most precious family across the ocean collided with another vessel and rapidly sunk, taking the lives of all four of his daughters and sparing his wife alone. Receiving the news of this devastation through a telegram that simply said “Saved alone” from his beloved wife, Spafford quickly set sail across the same ocean that took his children to its depths to reunite himself with his grieving wife. As the ship neared the location where Spafford’s daughters died, the captain notified him of this. It was in these next moments as he hovered over the waters that took his children, Horatio Spafford penned some of the most beautiful words ever written. Not a soul on earth would have blamed him had he wrote a song of only grief and sorrow. But he did not. The first verse is clearly about the loss of his children, but the song doesn’t end there. His words go on to express deep gratitude and endless joy for the sacrifice that Christ made to rescue his own soul! Ending with a plea in his own words that says, “Come quickly, Lord Jesus, come”, it’s all that I can do but to weep through the words of that final verse. He embodies the very words of Job through this beautifully written hymn:

As I sang these words at that funeral, for the very first time I became fully aware of the cost of my own sin. It wasn’t about the sin of the man that now lay in that casket. MY SIN, not in part, but the whole was nailed to the cross, and I bear it no more! Praise the Lord, praise the Lord, oh my soul! It is well with my soul.

Far too often, the sin of another wreaks havoc on our lives. The senseless mass shootings that take the lives of the innocent leave us near hopeless as we seek to carry on. But the Word of God remains t

rue. Christ was innocent, but in humility He chose to bear our faults and our shame so that we wouldn’t have to. There shouldn’t be a doubt left in our minds that evil exists today, and it’s all around us. Though Satan seems to buffet and trials continue to come, be blessed with the assurance of Christ’s shed blood on your behalf. He died to rescue us from this life.

It is well with my soul.

If Spafford could respond with such tremendous faith in light of such grievous circumstances, so can we. Praise the Lord, praise the Lord, oh my soul.

Tho’ Satan should buffet, tho’ trials should come,
Let this blest assurance control,
That Christ hath regarded my helpless estate,
And hath shed his own blood for my soul.
My sin – oh, the bliss of this glorious thought!
My sin – not in part but the whole,
Is nailed to His cross and I bear it no more;
Praise the Lord, praise the Lord, oh my soul.
And, Lord, haste the day when the faith shall be sight,
The clouds be rolled back as a scroll,
The trump shall resound, and the Lord shall descend-
A song in the night, oh my soul!
(Changed later to: “Even so – it is well with my soul.”)

Previous Post: « Hope in the face of despair
Next Post: A prayer for the brokenhearted of Newtown, CT »